Facts and Figures (courtesy of 7Summits.com) 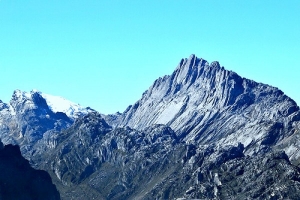 History of the Carstensz Pyramid (courtesy of CarstenzPapua.com)

Carstensz Pyramid (4,884 metres (16,024 ft)) in Western Papua (formally known as Puncak Jaya) and is a large limestone escarpment jutting out above the rainforest. It is considered to be one of the most remote of the seven summits. An expensive helicopter ride is required to get to base camp.

In the past climbers have been faced with many obstacles – they include the impassable jungle, the confrontation with tribes  and problems with the guerilla freedom movement. The presence of the world’s largest goldmine (Grasberg), the unwillingness of Freeport of Indonesia, and the never ending bureaucracy and insistance of having the number of necessary permits, make climbing the mountain a daunting task.

Carstensz Pyramid is also known to be one of the most technical of the 7 summits climbs, requiring good rock climbing skills.  This is also a difficult climb because of the political uncertainty in the surrounding area. The region had been closed to foreigners from 1995 to 2005, due to separatist fighting. Since its recent opening, there has been a rush for many climbers to catch this peak before it might be closed again.

Most climbing stories in Carstensz always involve hassles with illegal entry and paying hefty bribes. What worried me the most at Carstensz was the political situation, even after we had paid a hefty bribe, we still could not be sure if we would get to climb it until we were actually on it.

We flew to Indonesia and carried money on our bodies in the event that we had to pay bribes. According to the officials the bribe had to be paid in cash! While in Jakarta, we learned that there was a riot in the area surrounding the mountain and the trip would be delayed. We watched and waited for any developments in the region, until the local police gave us the ok to go on ahead. Once on the West Papua New Guinea island, we were careful on where we went and didn’t go too far from the hotel. Things could get dangerous at any second.

What we thought was supposed to be a legal approach became an exercise in smuggling. We dressed up like mine workers and travelled in a dirty bus, ducking down in the vehicle from time to time to pass the security checkpoints, driving through tunnels with headlights off, and covering up our helmet lights while hiking in dark.

Political risk aside, the climbing itself was enjoyable. It rains often in the area because it’s surrounded by tropical rain forest, so the rock is wet in most places, and we were in rain for the later part of the ascent and all the way on the descent. There were fixed ropes on most of the sections, which made climbing in the rain not as treacherous as it could have been. Technically, the climb was not hard, any intermediate level climber would find it easy and enjoyable. But the altitude definitely wore down on the muscles faster than at sea level. So I often used the rope to aid harder sections to avoid burning out my muscle too soon.

The most fun and most strenuous part was the Tyrolean traverse on the summit ridge. Before this trip, I didn’t even know the meaning for this term, or how to do it. In order to cross the largest gap on the summit ridge, you have to climb a horizontal line of about 20m by hanging under the rope and pull yourself through to the other side. Hanging yourself in the air at 4800m itself is scary enough, not to say being upside down, making it hard to breathe at high altitude. The sheer drop of thousands of feet under a suspended rope made it a thrilling experience, and the altitude made every pull action as exhausting as it could be.

Descending the 800 meters drop from the summit was a more serious matter. It required a long rappel down, and with the rain, the distance, the sharp rock, the complex route structure, made it dangerous. It required all my concentration as all it took was a split second to have an accident. I fully appreciated every little tip I was given while I was learning climbing – finding a harness with the right fit, the proper helmet, the prussic and the extension of rappel setup.

But most importantly, keeping yourself focused and disciplined when you repeat the process so many times, that your mind tends to wander – risking a fall, especially when you’re tired and want to get down quickly. A good climber needs to keep their cool in all situations, be disciplined to follow the proper procedures and stay alert and focused all times, especially after a long day

This climb became the most expensive one for me in terms of cost per day. The climb itself takes only one day, and the money you pay out does not benefit the locals or the climbing community. The risk was more related to the political situation than on the mountain. It brought me face to face with corruption for the first time and it was interesting to learn many facts about the Freeport gold mine, especially learning on how western businesses are taking advantage of developing countries. It was interesting to hang out with local people at basecamp and learning how their lives were affected by western commercial exploitation of the area.