According to my guide, going to the South Pole is like walking on a treadmill in a white wind tunnel pulling a bath tub! Antarctica is a giant white desert. There’s nothing to see. You can’t tell where sky meets the ground, and there’s no reference point in the distance to aid your direction. 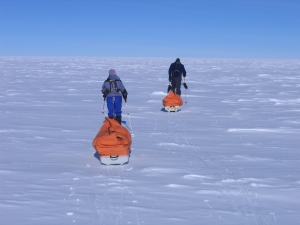 The sun never sets, and it’s always at the same height in the sky all day long. If you head due south, your shadow slowly makes a circle around you as the hours of the day pass by.

I have to admit that I didn’t train as hard as I should have for South Pole trip, and this became a huge factor during the first few days of the trip. I didn’t expect the sled to be so heavy.

As I was strong enough to pull the sled in Denali, it should have been the same here in the Antarctic. I was wrong. It was a very painful struggle during the first few days. The trip towards the South Pole was a gentle up slope all the way, and those sastrugis, snow drift, created a serious hurdle in pulling the sled.

Imagine pulling a large bathtub that weighs a hundred pounds uphill on cross country skis. In many cases, my sled often pulled me back down the slope! After the first couple days, I finally slowly tuned in the rhythm of creating a harmonious relationship between my ski and my sled, learned to manage the momentum of motion at sastrugis and pace myself throughout the day.

To adapt to life in Antarctica, you have to stay warm. You have to carefully manage the layers so you don’t sweat too much while moving, yet cover up every inch of your skin to avoid frost bite.

The air was dry and cold, the vapor from our breath instantly became ice frost on our face mask. To keep the energy going smoothly for a day, we were disciplined about taking 5 or 10 minutes break every hour to load up drink and energy. As you can’t tell when it’s going to get dark, there’s no reference point on this big plain, everything goes by your clock.

After hiking for 8 or 10 hours, it was time to break camp. It gets very cold once you stop moving, so we had to set up the tent as fast as we could. And once in the tent, quickly change into dry clothes and dry socks, warm up the feet and hand. As cold as it can be outside, inside the tent can be very toasty because of the way the tent traps heat. It also helps that the sun is out for 24 hours, aiding in warming up the inside. Much like the Polar Bear plunge, going outside from warm to freezing was an experience.

Unlike the North Pole, the South Pole has a distinguishable landmark..During the last two days of the trip, you began to see a tiny grey dot on the horizon, and it got closer and closer with every passing hour. As you got closer you can make out the modern building constructed over the South Pole. Having been out in white desert for the trip, viewing the US South Pole station was a surreal experience.

The last day was the coldest day, with a wind chill of -48F. Even if we stopped for a few minutes for a break, it was really hard to warm up. So we skipped rest stops and kept hiking til we arrived at the station, not even taking a drink or a bite to eat. I was very exhausted by the time we pulled over the south pole, but that little pole, just having to march the last few hundred yards filled me with pride!

Due to the similarities in techniques and geographic locations of the poles, I’ve decided to combine the two together.

Taking the lessons that I learned from the South Pole trip, I put some extra time in training hard for the North Pole and found myself much more relaxed and had more fun on this trip. The biggest difference between the North Pole and South Pole is that North Pole is not on a continent, but rather on the ocean. So there’s no fixed point for the pole. Only your GPS can tell you that you over the pole. 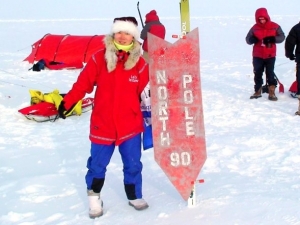 The whole trip is on floating ice, not on land. Which means the ice can move anytime, or drift with the current. When we were dropped off by plane, onto the ice, where there was a huge crack next to the runway. In many cases, we had to ski over some thin ice, which sometimes can break under you and drop you into the ocean – dangerous because of the cold. You often need to jump from one piece of ice to the other to cross a gap, and the two pieces of ice could be moving in opposite directions. There are numerous pressure ridges, where two big pieces of ice collide and crumbled into piles of broken icebergs. Finding the safest path through the jungle of broken or floating ice is dangerous.

At night, we camped on fragile ice islands, that you hope won’t break up under you! All these things made North Pole trip a bit more dangerous than the South pole trip, because there are unexpected things to deal with all the time. The scenery changes a little bit with different shapes of icebergs around. Of course, it’s not fun if you keep breaking through the ice and falling into the ocean regularly. This happened a few times to some of my bigger teammates. Luckily, as I was the smallest person on the team, it was meant a much lower chance for me to break through the ice!

Due to warming temperatures, there are lots of areas where there is open water – called “leads”. We had to constantly detour around them, sometimes a hike of several miles long. Sometimes you could be working hard towards heading north but by end of the day, because of the ice drift, you could end up further south! We often wake up in morning and found ourselves back to where we started the day before!

Because the ice never stays constant, always melting and floating around every year, there’s no way to fix a structure on land to mark the pole, only GPS can tell you. Chasing the exact spot when we were almost at the pole was a fun experience. The ice was moving so fast, that we couldn’t “catch” the pole with the heavy sled behind us. So we dropped the sled to walk faster, then started running in circles to catch a glimpse of that treasured 90:00’00” showing up on our GPS.

Life is about experience, not a destination. I thoroughly enjoyed the journey to both poles, it’s an experience that became part of my blood, and a lot of memories could not be registered on camera.