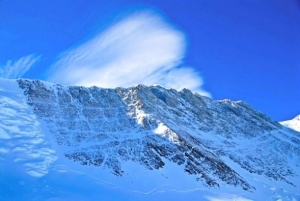 Facts and Figures (courtesy of 7Summits.com)

Original Name: Vinson Massif was named after Carl G. Vinson, a US congressman who persuaded the US Government to pledge support for exploration of Antarctica in the 20th century.

Mt. Vinson, the highest mountain on the coldest continent, Antarctica, is definitely one of the coldest among the seven summits. The normal temperature on a perfect day is -15F, so even a mild wind would bring wind chill to brutal levels. I love the snow, so Mt. Vinson and Denali are the most beautiful mountains I have climbed, and their scenery are very similar.

Antarctica is hard to reach, where there is only one plane that can take commercial teams to Patriot Hill, the base for all commercial activities on this continent. So it’s with no surprise that attempting to climb Mt. Vinson also has its own unique rules, among which, anyone who wants to climb Mt. Vinson has to join one of the guided teams approved by the Antarctic Logistics and Expeditions (ALE), the company that controls the transportation and logistic supply of Patriot Hill.

As a result, I got on my team some of the most experienced climbers in the world, including the world famous climber Um HongGil from Korea, who was the 8th person in the world to climb all 14 of the 8000m peaks. There was also the fastest Ecuadorian climber Patricio Tisalema Torres, a professional guide himself who soloed Mt Everest last year without supplemental oxygen. Other members include Basar Carovac from Serbia, Andries Botha from Canada, and Mr. Go from Korea as well. It was very rare that all the top climbers work together! The dynamics of such an international team made the experience very interesting, but what was really exciting was the amount of knowledge in one spot that I could learn from!

Climbing Vinson required the same climbing technique as that of Denali. We traveled on ropes most of the time because of the danger of unseen crevasses, pulling sleds across glaciers and carrying double equipment to high camp. Vinson’s headwall is not as vertical as that of Denali, and it’s safer to hold on to fixed rope while traveling. Overall, the climbing is easier than Denali, but colder. We were lucky to arrive after a bad storm just passed, which held down previous teams for weeks without summiting.

But I had my worst summit day ever. I had eaten badly cooked freeze dry food and caused bad diarrhea on summit day. It meant that I had to make frequent awkward stops. It also meant I couldn’t eat or drink on summit day because I couldn’t hold anything in. I was concerned about keeping my balance on summit ridge and worried about getting into trouble because of my deteriorating conditions. I was just glad to make it to the top and back safely.