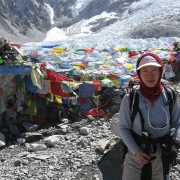 My cough is clearly picking up at the same time while my appetite is subdued at 6000m, though I’m happy that I don’t have any altitude symptoms— not even a headache. From what I’m hearing from everyone, this is normal for Khumbu Cough, the cough triggered by the cold dry air at altitude. Woken up by cough many times last night, I decided take more rest today— I only went for a short walk near the camp.

Looking from a distance, the setting of camp 1 is one of the most beautiful places. The rock wall of Everest rises above it so close! Can’t believe it’s only less than 3000m from here, yet it’s still weeks away for us to reach! Far away, Pumori, Lingtren, and Khumbutse paint a beautiful background to the west, while Lhotse faces straight to the east.

The route to camp 2 appears to be very straightforward on that giant gentle snow slope, but it’s still a lot of zigzagging across the maze of crevasse. At one point, the top of the ladder barely touched the lip of the crevasse. It’s a game of gamble before the lip melts away one of the days. But sometimes you just have to take the chance and move on.

The most agonizing part is from the time you see the campsite of camp 2 to the point you finally arrive at your campsite. It’s still hours of uphill trip, and exhausting! I was surprised that camp 2 is almost as big as

EBC in a sense. Because this is ABC, the Advanced Base Camp, every team built a permanent (for the season) campsite here including sleeping tents, standing cooking, dining tents, and toilet tents.

IMG camp site is high up on the hill, yet you are not sure where. So you must keep climbing over one false summit after another; you can’t let yourself relax the moment you step into the general campsite. You have to keep on putting in extra effort to make another step up the hill till you really reach your own campsite.

This would be the highest point I would have slept at to date. AMS symptoms normally start after you wake up from your first nap. Under the advice of our guide, I spent the afternoon sat around chatting and drinking, being active to avoid AMS. I’m happy that I’m mostly headache-free at 6500m. But nothing is easy here. To walk up and down the small hill between tents is already a big challenge! First, it’s a “big” decision to put on the big boots and put on all the layers of clothes, especially when it’s windy and cold outside; second, it takes several deep breaths before you finally summon enough strength to crawl out the little hole of the tent on the creepy hill— then every step up and down the hill at 6500m is not trivial!

Yet, we haven’t started the hard part of the climb yet— Lhotse face! This is not an easy mountain, and every step is an achievement in itself. It’s not only just huffing and puffing to fight against the thin air, it’s also fighting against your own pain, from cough, from wind, from heat, and from your own doubt. Every step is a hard physical effort, but also an extremely hard mental effort! Everyone is tired reaching this point. You may not be the strongest one on the team, but that doesn’t mean you should give up. You have to keep faith in yourself all the time despite the external hardship and internal weakness. Fight against the physical weakness with your mental strength.

I was hungry at dinner, but we were only allocated one small slice of SPAM per person other than some spaghetti. It’s not easy to bring up enough nutritious food this high. 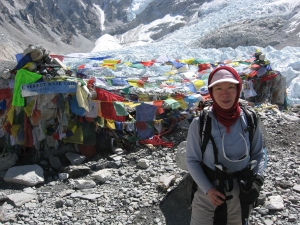 The first half of last night I practiced sleeping with my full suit on inside my sleeping bag, since that will be how we sleep once we move up Lhotse wall. It was so uncomfortable that I could not fall asleep. But the second half of the night, after I threw away the full suit, was only slightly better. My cough kept interrupting my sleep, and while not coughing, the extreme dry air irritated my throat. It can’t be quenched by a cough drop or hot drink. I probably got no more than a couple hours’ poor sleep in the end.

The second night at camp 2 was one of the longest and the most torturing nights I have had in the mountains. Despite my effort to control my cough with medicine, every few minutes, my violent cough would throw my body into the air; oftentimes I had to cough till I nearly threw up to find a little relief. I don’t have any AMS headache, but each shake from cough causes a lot of pain to my head. In the short peaceful minutes between bouts of cough, the unbearable dry air irritates my throat to the level that I would rather bear the painful freezing night to get up to drink hot water. But neither hot water nor cough drop could provide even a short moment’s temporary relief. I was painfully aware of every minute passing by and never looked forward to the daylight break so much!

The first time I saw the mucus come out from my cough, I was horrified. I never expected such a thing to come out of a live human! It was so dense, like a piece of dead meat! The greenish color made it appear to come from an alien’s body. I had no idea if this is what people call Khumbu cough?

I guess the whole campsite heard my all-night cough. When we finally got up to pack up to head down the mountain, guide Greg asked me if I was sick. I still didn’t understand the difference between cough and sick, and replied “just cough.” Everyone is coughing. Until we started walking down the hill, I hadn’t realized how much I have been weakened by the two days at camp 2 or by my violent cough. When trying to get up the first fixed line, I was shocked to realize that I can’t trust my hand belay without a jumar anymore. I also felt loss of muscle strength in my legs too! I was feeling quite weak by the time we walked into camp 1. My body wanted to spend more time resting here, but I understand we’d better get down the icefall early in the morning, and getting lower will help my health/strength.

Walking up the hill to leave camp 1 was hard. Though it’s 500m below camp 2 already, I still haven’t found much benefit of the altitude drop yet. When further lowering into the icefall, I gained some strength back in climbing the fixed rope up and down the icebergs on hand belay. But my cough is not getting much better. I would burst into violent coughs almost after gaining each little hill. I could only do short, shallow, frequent breaths instead of well-rhythmic deep breaths, or I would end up coughing and stopping to gasp for air. After spending nights at 6500m, I should have flown up hills at lower altitude. I was sad to find that was not the case for me. Lower altitude didn’t relieve my violent coughing pattern. Shortly into the icefall, I also completely lost my voice.

After we finally reached EBC, I went straight to HRA. It took no guess for the doctor to tell me that it was not Khumbu cough that I’m having. Good news is that it’s not HAPE or Pneumonia neither, which I feared. It’s that remnant cold virus I had before I gained super power, when high altitude weakened the immune system. He gave me some strong antibiotics and suggested that I may benefit from further lower altitude. So after discussing with IMG guides, I decided to descend to Pheriche (4200m) the next morning.

EVEREST – EVERY STEP IS HARD!