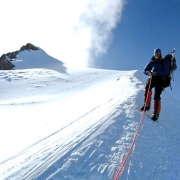 We got up at 4:30am for 6:30am flight to Lukla. After having waited at the airport for 6 hours yesterday only to have the flight canceled, I was just reminded of my experience of waiting in Talkitna Alaska for my flight to Denali. So when the flight was delayed again this morning due to weather in Lukla, I was not even expecting to leave today. Foggy/low cloud condition had closed Lukla airport for almost 3 days. Past experience of the endless waiting game on Denali and in Antarctica has made me very mellow and patient about delays like this— though these experiences may be shockingly unpleasant to people who can’t even put up with delays in normal commercial flight service. Some trekkers eventually paid an extra $100 for a helicopter ride to get out of Lukla. The twin otter ride should be about $160-200 round trip.

Finally, around 8:30, a cheer broke out among the hordes of people waiting impatiently. I was not even expecting to fly today, but I was happy. With my memory of the Denali flight still fresh, I know taking off does not mean we can land. So I held my breath until we started to approach the Lukla airstrip.

The scenery along the flight was beautiful. I enjoyed the view, which was full of green ragged mountains in handsome shape. Crops fields lined up hillside, the road cut sharply along the steep hill. I imagine that a drive must be a thrilling experience! We could see some magnificent peaks in the distance. I was especially fascinated with one rocky peak with a small ice/snow top, which looked like Eiger in the Alps. I wish I could identify the names of those mountains, and I hope I will become more familiar with them by end of the trip— I know I will staring at those beautiful peaks a lot on my way to Gokyo. They took my breath away!

The landing strip in Lukla is on a 12 degree strip of land uphill,150 yards long. The uphill makes it possible for small planes like twin otter to land and take off quickly. Lukla is a beautiful village on the hillside. As we landed, other trekkers who had been waiting for days to get out Lukla were already lined up on the tarmac, ready to load and board. Within just 10 minutes, the unloading and loading process finished and the plane took off! 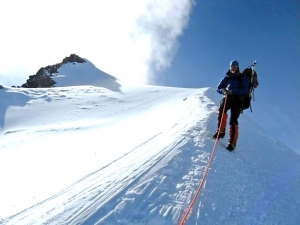 Himalaya is the mecca for mountain lovers!

Lunch at a Lukla restaurant was more nutritious and delicious than I expected. I loaded up on protein (beef) and carbs (potato), and was very delighted to have found fresh green leaves in vegetable soup. After loading up with water, we started the first day of hiking. My Sherpa for the trekking part is Dawa from Portse. He is 50 years old, and has worked as a Sherpa since 1977. He has summited Everest 7 times in the past few years.

The beginning location of the trekking, Lukla, and the end-of-day destination, Monjo, are at about the same altitude, around 2840 m (9300 ft). But the trail goes up and down about 1000 m (3000 ft) while following the valley from high up on the hillside. This provides a good exercise for the first day.

The area is just endless green mountains along a winding valley, under the background of blue sky and light clouds. Cabbage or other vegetable fields decorate the hillside. Down below in the valley, a beautiful turquoise river shows up from time to time. At every turn is the scenery that I can’t stop taking pictures of because I know when I return, I may not have much energy.

A few small Yak teams from either direction passed us sometimes. Since climbing teams won’t arrive here for another week, the trail is not filled with dust from numerous passing yak teams. Breathing in fresh mountain air is such a nice change from the polluted Kathmandu air. Within a few minutes into the hike, I know I would love to return to the Himalaya mountains again, trekking or climbing! Having seen a lot photos and caught a glimpse of those high peaks on the flight, I can’t stop imagining how breathtaking it would be to see those peaks so close around me in Gokyo. Thoughts like that make me feel my heart crying out for those serene places. I even start to wonder if I could gather the energy to go pay a visit to Annapurna at the end of this trip. Himalaya is the Mecca for mountain lovers!

We passed many beautiful hillside villages along the way. There are a lot of Buddha statues on the trail, and it’s very important to always pass by the statues from the left side with sincere respect. Villagers are all very friendly and peaceful. What an enjoyable place!

After 5 hours or so, we arrive at Monjo. The lodge is nice— it even has electricity and a clean western toilet! Meat is hard to find on the dinner menu, except for a tiny bit of tuna from the Tuna Vegetable Momo (dumpling). Other than rice or noodles, I was happy to have some healthy fresh cabbage and potatoes. I have to load up more protein in Namche tomorrow!

To prepare myself for the climb, I watched two episodes of Everest: Beyond the Limit on my laptop while having dinner. Season 3 follows the IMG team, the team I’m on this year. We could even see Jangbu Sherpa and Dawa Sherpa, who I have just met, in it. It’s important to climb within one’s limit!

TRIP TO EVEREST – MY IMPRESSION OF KATHMANDU, NEPAL

EVEREST CLIMB – MY TREK FROM MONJO TO NAMCHE
Scroll to top