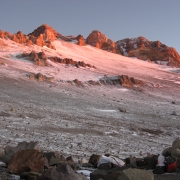 Didn’t sleep too well last night. Went to bed late because I stayed up to write my journal after I watched the movies, then woke up a few times. I woke up before dawn at the bell ring of passing yaks. Based on my past experience, I know I’m slow on the acclimatization process— that’s why I wanted to do the extra trekking before the group arrives. I must be a little bit nervous about the climb. I dreamt of strange oxygen saturation numbers a couple times, and woke up to feel my heart beating much faster than my normal pace at sea level. As the altitude goes higher, the heartbeat speeds up because of the extra work needed to pump more oxygen into the blood system (is that correct? I need to study more of the change of heart and red blood cells at altitude).

Had porridge and an omelet for breakfast, didn’t like the greasy feeling of the omelet afterward. At altitude, the stomach starts to behave differently, becoming more sensitive to greasy stuff and tending to be more gassy, which causes what we joke is HAFE: High Altitude Farting Edema.

Leaving Monjo, we officially entered Sagarmatha National Park, where Everest is located. Weather was chilling in the morning, but heated up pretty fast as we approached Namche. Winding along the valley followed by the pleasant sound of the glacier river (Bhote Koshi River) down below, we first descended about 450m before starting the rolling hill ascent of about 1000m to Namche.

I also ran into Mark Inglis, the first double amputee who climbed Everest from the north side in 2006; he is leading a New Zealander charity trekking group to Gokyo this time, and will be on the same schedule as me! We are staying at the same lodge in Namche, and I will expect to see his group every day for the next week! This is awesome! 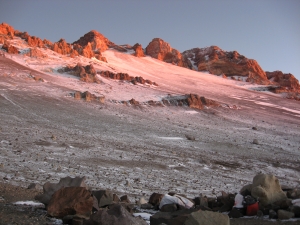 It became more dusty as we approached Namche because the air got drier as we got higher, and I needed to start to cover up my mouth/nose more. Radiation from the sun also became stronger— more sun protection from now on!

Nothing comes cheap here. 15 rupees per minute for internet access— 1 USD for 5 minutes! Spent 300 rupees (4.5 USD) to take a shower, and had to struggle between burning hot and icy cold water. Checked with the Sherpa: good news is that shower in base camp is free and should be warm. Can’t wait to get to base camp!

Eating food is a bit difficult. I need to eat a lot of protein, but it is limited. I ordered “steak, roasted potato and veg” for both lunch and dinner. The steak is only a few pieces of buffo meat of about 30 grams. Lots of potatoes. And the vegetables consist of mainly fresh cabbage and carrots. Quite a healthy combination, but not filling. My stomach felt empty within just a couple hours after the meal. Trying to keep myself fed with my normal amount of calorie intake and nutrition structure on the trek is going to be challenging. I need to be more generous in allocating the almonds/nuts and protein bars I brought to the trekking part.

Spent the afternoon resting in the lodge, hanging out with friends, showering, sitting around for meals and more chatting with Sherpa and friends. Tomorrow will be some short hiking around Namche for acclimatization and visiting friends.

EVEREST CLIMB – FROM LUKLA TO MONJO