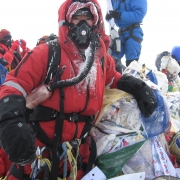 Today is the start of our first rotation up on Mt Everest. To climb a mountain as high as Mt Everest, we need to gradually expose our body to higher altitude instead of going up in one shot, which a normal person would surely not survive. To  achieve that purpose, we are planning several rotations, each time sleeping at a higher altitude, then returning to EBC to recover before going through the next rotation. A few days ago, we climbed Lobuche peak, which is as high as camp 1, so as to save us one rotation through the dangerous Khumbu icefall. The goal of this first rotation is to adapt our body to the altitude of 6500m, where camp 2 is.

(Note to readers: In Sherpa guided climb, each climber is on his/her own schedule. So when a “group” goes up the mountain, it does not mean everyone on the team is going on the same schedule. Actually, only half of my team is going on this rotation on this date; other members choose to go up on a later date because of health or strength reasons. So if you are trying to follow a specific climber, please do not assume/predict his/ her whereabouts based on general group progress.)

To avoid spending too much time during heated hours in the icefall, we started early, before 4am. A Sherpa started the Puja fire before our departure. Led by my Sherpa, we passed from the left, grabbed some rice and threw it into the air three times, bowed and made a prayer for our safe climb, then started our walk towards the icefall. Most of the camps along the trail are still sleeping, though from far away, we can see lines of headlights in the icefall already.

The beginning part of the ice fall was some up and down trekking through the maze of endless rising hills of ice of various shapes. Some parts are steep and it is safer to grab the fixed rope just in case. Most of the time I found it ok just to hand-belay myself up instead of bothering with the jumar. Soon, we hit the first ladder and then endless ladders over all sorts of monster icebergs. Daylight starts to break, and I can clearly see the crevasse below the ladders. I would say, it’s not for the faint of heart. It’s joked that if you fell through those crevasses, you’d get a direct flight to America. But fortunately for me, I didn’t have a problem with the exposure, so I always looked into the crevasse to be aware of my environment. It’s an impressive mass of endless icebergs and it’s more impressive that ice doctors can find a safe path through this maze! 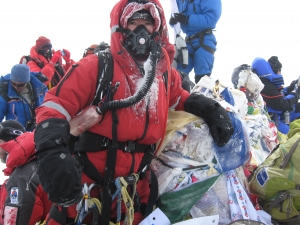 My cough just started picking up two days ago after that short exercise into the icefall and I coughed a lot last night. I must have coughed quite loudly, because several team members asked me, “Lei, are you sick?” when they passed me on the trail. “No, just a cough. No problem.” But my cough is getting worse, I can tell. Oftentimes I had to stop to gasp for air after a bout of bad cough, and it’s happening more frequently, which tired me out and slowed me down more and more.

Just as we finally topped out icefall near camp 1, we suddenly heard a loud noise above us. Looking up, rain of rocks and ice/snow is flying down from the west shoulder of Everest along the big wall next to us. Luckily, it was not a huge one and it was losing strength as it came down the mountain, and there is a little bit of distance between us and the wall. We were still clipped to the rope as we just crossed one crevasse.

Following my Sherpa, I got low to the ground and tucked my head to my knee. At the same time, our radio fired up with incoming inquiries from base camp and camp 1. We only got some dust from the avalanche and immediately replied a safe message to the radio.

Looking from far away, the camp 1 is built on a giant gentle snow slope. But look closely, and it’s laced with crevasse everywhere. We kept on making big zigzags for the safe pass, which made the trip much longer than the direct distance between us and the destination that appeared to be so close to our eyes. I can say I crossed my lifetime worth of crevasse today from the beginning of the icefall to the camp 1 and I know I will cross them several more times again on this trip! After climbing up the final steep hill, I finally arrived at camp 1 around midday, very tired needless to say. I find myself for the first time on this trip losing my appetite, and I know it’s not good. The first day at camp 1, I think the total I eat is less than what I would eat in one meal at EBC.