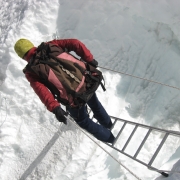 Before I dive into the lessons I learned from Everest, first of all, how did the whole thing start?

The credit goes to the documentary movie “Touching the Void”.

It was my first winter in Boston. As a fresh MBA graduate, I was working a 12-hours-a-day corporate job and focused on my career track only. For a book nerd growing up in Beijing, mountaineering was totally “other-worldly”. In fact, I was so scared of the brutal cold that, before that movie, I had not even ventured the 4-blocks walk from my home in Back Bay to the Charles River.

I never knew humans can be that strong! I wondered, is “mountaineer” some kind of special specie, a superhuman? Can an ordinary person like me ever do something like that?

I went to the library and borrowed as many documentaries on mountaineering as I can – there’s no streaming Netflix yet. And guess what, Everest is the one standing out most on that shelf.

After a weekend-long movie binge, I discovered, mountaineers are just normal human beings! Many of them had normal jobs outside the mountains, many of them didn’t stand like a giant, and most of them look like a normal person! That discovery got me excited. I concluded, a “normal” person can become a mountaineer, an ordinary person can climb Everest!

June 2004, I audaciously declared Mount Everest as my dream, despite the fact that I had not even seen a trail map in my life yet! To be completely honest, I didn’t really expect to climb Everest one day. I was just hoping, by shooting at the moon, at least I could motivate myself to start running and going to the gym!

I’m glad I didn’t stop at running and going to the gym. My curiosity led me to taking classes in climbing, camping, and more and more … before I knew it, all my life outside the office is centered on mountains.

Mountains taught me to be humble, to be respectful, to always be a learner, to always put in the best effort. There’s no handicap or excuses, you just have to train hard and get stronger. There’s no short cut or privilege, only honest and consistent effort will pay off. There’s no taking for granted, you have to earn each step.

March 2010, when I was really making my first step hiking towards the Everest Base Camp, I felt as if I had been in my dream. Six years before, when I started my daydream, I never have expected, one day, I would really set my foot on Everest.

I had come a long way! Starting from basic fitness foundation training through running and hiking, learning all the technical and safety skills, to gaining experience on bigger and bigger mountains, and gradually testing myself in more and more complicated situations.

Despite the obvious fact from day 1 that I was the smallest, the weakest, and the slowest on my team, I told myself: Being able to make that first step is a success by itself, regardless of the outcome.

Everyone has a different starting point and was gifted with different talents. Instead of worrying about how people would judge me or the slimness of my chance for the summit, I repeatedly told myself, every step higher on the mountain is a success, regardless of summiting or not.

Many people have argued that, just for the fact that I dared to attempt this mountain, I can’t call myself ordinary. However, if you have met me when I first started daydreaming about Everest, you would have laughed at me just like my old colleagues did. In fact, even years after I have climbed Everest, some of my high school classmates still thought I was joking when they first heard about it. They only remembered me as a book nerd who could barely pass PE tests in school.

Even today, after I have been training for so many years, I continue to feel humbled by the high performance standard of our mountaineering community in both my original home base of New England and my newly adopted home of PNW (Pacific North West). No matter how you may argue, I only feel comfortable calling myself an ordinary mountaineer.

However, like in many situations in life and career, our natural talent level is often not the most important deciding factor in one’s success – of course, there are some objectives in climbing, in life, and in business, that you simply can’t risk unless you have really high competencies – On Everest, the physical capability is not the most important factor.

Mental strength can be trained and learned. That’s the lessons I’m going to share in the next few weeks.

The most important lessons from Everest