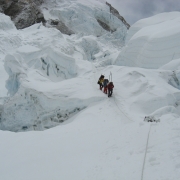 It’s that time of the year again … May always brings back the memory of Mount Everest.

This year is the 11th year anniversary of my Everest summit.

In 2004, inspired by the movie “Touching the Void”, I had this daydream of climbing Mount Everest. Yet, growing up an unathletic book nerd in Beijing, I never expected that I would really climb this mountain one day.

Six years later, when I finally started hiking towards Everest Base Camp, I was considered, by almost everyone on my team, the least likely person to succeed. I was the smallest, the weakest, and the slowest. Yet, among 4 women on my team, I was the only one who summited. Among our team of 25, only 16 made it to the summit.

By all means, Everest started as an impossible goal.

Since my return from Everest, I have always been asking myself, what are the most important lessons I learned on Everest?

In the next few weeks, I will share the most important lessons I learned on Everest, and how that helped me thrive today. I hope they would inspire you and help you thrive in your own life!

First, why do I climb mountains, or more specifically, Why Everest?

Everest Lessons: How did it start?
Scroll to top