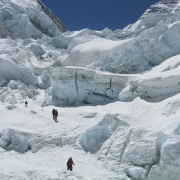 This rotation is much more challenging than the first one but I’m feeling stronger and enjoyed it much more. Good health makes a big difference! Not only does it make me stronger and more energetic, but more importantly, it makes me focus on acclimatization instead of fighting the painful cough.

Though I was still very tired when I arrived at camp 1 and camp 2, I was not as exhausted as I had felt in the last rotation. My appetite was good during the whole rotation, and I often ate no less than the biggest guy on the team. Kitchen staff often took me being full as the indicator that everyone else had enough food. I realized how fast I could lose weight at high altitude and I know I can’t afford to keep losing muscle mass at such a rapid rate. Otherwise, I would have no strength left climbing the summit. So I kept on feeding myself protein-based food as much as I could throughout the day.

I slept well and I was surprised that at my personal best elevation— camp 3 (7200m, 24000ft), I was still able to eat and sleep relatively normally (compared to the lower camps). Until people started mentioning it, I totally forgot about panic breathing during sleep— feeling suffocated while sleeping and panicking while trying to catch your breath. Although, I had the bad habit of burying myself completely inside my sleeping bag at night…no wonder there didn’t seem to be enough air inside my sleeping bag!

Five days in a row, we got up in the middle of the night to start climbing before the sun heats up the glacier to an unbearable 100F by mid-morning. Though we finish our climb early in the day, that doesn’t mean you can go back to sleep for the rest of the day. Inside the tent, it’s too boiling to sleep during the day. You have to wait until the late afternoon, when the sun goes behind the mountain, which makes you instantly need to crawl back into your warm sleeping bag! Every day is a hard day, and the hardest day was the day when we climbed on Lhotse face, moving from camp 2 to camp 3. 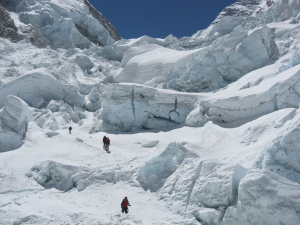 Ideally, I would have liked to rest a day in camp 2 before tackling the demanding climb at Lhotse Face. But the weather forecast was predicting high winds moving in after tomorrow (May 6). We had to climb it tomorrow or we might have to give up. Another question was, what to wear to the climb on Lhotse Face? It will be very cold in the night, requiring us to be fully equipped in our summit suits. But once the sun comes up, you have to strip down to your T-shirt.

It’s a steep slope, which means there isn’t a safe spot to take off or put on a summit suit. It’s a long climb, and entirely under the hot sun. Every one of us decided to climb in our summit suit, and planned to strip it off at the top and tie it around our waist once the sun came up.

The night was warmer than I expected. Once I started walking, I immediately had to unzip my suit, just to cool down! The slope is steep all the way, and there are several long sections of hard ice bulges that make it a very demanding climb. To be safe, we kept the jumar on the fixed rope all the way.

Once we started climbing on the steep slope, I faced another dilemma. If I covered my face with buff or balaclava, I protected myself from Khumbu cough or sunburn, but I couldn’t get enough air to breathe when the climb demanded it. Air or comfort? A hard choice!

Luckily, the sun was not too cruel today. There was some cloud cover, which significantly reduced the sun’s heat. There’s actually two campsites. A lower camp 3 and a higher camp 3. Unfortunately, the IMG site is the furthest spot on the highest spot at the higher camp! While you’re on a steep slope, you can see very far. But looks can be deceiving! Anything that looks close is actually hours away! From lower camp 3, it’s an hour’s climb to get to the higher camp using a fixed line branching out to the right from the main climbing route.

And yes, you need a fixed line to go to the campsite! The whole campsite rests on a steep slope. There’s not much “flat” ground. Each tent platform has been dug with hard work! There’s not much room between tents even to the edge of the platform. So I had to be very careful in moving between tents! We don’t want to risk damaging our tents with crampons, so the advice is to take an ice axe if you want to walk to the “toilet” just in case you miss a step.

On the way down, I was really looking forward to being back at home, my sweet tent home in EBC, and the feeling I looked forward to most was touching my face with the warm wet towel that would be served at dinner or breakfast time. That’s the only time I clean my face with something other than the freezing cold baby wipe! Our Sherpa guides are also looking forward to being back at home too, but their real home. The moment we touched down at EBC, most of them took off immediately to spend a few days with their family in Portse (most of our climbing Sherpas came from Portse, a village between Namche and Pheriche). Only then did I realize that I have been on the road for more than 50 days already. Time flies by so fast! Yet, the game is still far from over!

EVEREST – WHY IS IT SO TOUGH?

THOUGHTS BEFORE THE EVEREST SUMMIT
Scroll to top