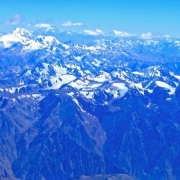 Last night’s snow stopped by dinnertime, and the accumulation is only a few inches. I was feeling good about the altitude. So we decided to skip the rest day and made the easy ascent to Gokyo at 4750m.

There’s a big group of Japanese trekkers at the lodge. They are mostly in their 60s, and they brought some traditional Japanese dishes to the trip, such as miso soup. This reminded me of the Korean trekkers at Machhermo lodge last night, where they were eating their traditional dish plates of many small pickles (forgot what they call it). This seems to be consistent with my encounters with other Asian climbers in my previous trips– Asians tend to adhere to their culinary culture even on such expeditions.

Dawa shared his experience of how he and his clients narrowly escaped an avalanche in Kumbu icefall last season, and how their timely response to rescue made a difference. We have seen the drama captured in Everest: Beyond the Limit, but hearing it firsthand is different. Filmmakers and audiences like dramas, but such excitement is only for people from outside and far away. In Dawa’s eyes, it’s not the excitement, but the concern and worry. Death in Kumbu icefall is just a probability game. Having worked on Everest for so many years, for him, it’s just a matter of time that one of his colleagues/friends would die there. This is a serious business. For climbers, we come here for the climb; for Sherpa, they are putting their lives on the line for the success of climbers! When they come to rescue, rescuers actually face an even higher level of risks.

I hiked to fifth lake at 5000m to enjoy the panorama view of the valley. Gokyo area has a string of turquoise glacier lakes, and the fifth lake is the one closer to Cho Oyu. I was surrounded by magnificent mountains during the whole trek. Cho Oyu constantly to the north, Thamserku and Kangtega constantly to the south, then Cholatse and Taboche to the east. I spent a whole hour there to take pictures and videos of the mountains in various combinations, watching Cho Oyu in and out of clouds. It’s amazing that when you are standing at 5000m, those high peaks do not look so intimidating.

At 5000m, still feeling healthy and comfortable with the altitude, I am huffing and puffing as I make my steps up the hill. What would it feel like for another 4000m? 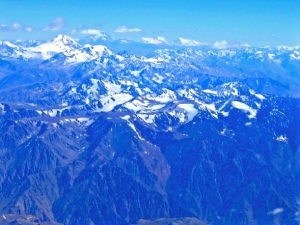 The price of food and drink sharply increases as the trail extends to more remote places. A bottle of boiled water is now 150 rupees. Hot tea is nice, but I have to calculate the budget to spend it on solid food. When we carry food on expeditions, we calculate calories per unit of weight, so we often take more fat in lieu of carbs or protein. Here under budget constraints, I am calculating the nutrition value per dollar. The new discovery is Tuna Mixed Pizza! It’s loaded with cheese, and has a thick layer of tuna and veg. Taste is not the first criteria for food here! It’s more important as to what food you can take in and what’s the best for your body!

One of the best things is that my laptop still works at near 5000m. I don’t know how I would write down all the details without this modern gadget. But I have to remember to warm up the battery inside my clothes first, and carefully plan what I will do once I turn it on. It’s important to make the best use of every minute of the battery power. It costs money to just charge the battery. Gokyo is the only place after Namche that can charge battery during this trek. Electricity and hot water come at a premium here.

Having been sleep-deprived at home, now the normal schedule is to sleep after 8pm, and wake up when light breaks around 5 or 6 am.

Air is much dryer here. There are traces of dry blood in my nose every day. I have to try to cover up my nose with buff when hiking to keep my airway moisturized, and prevent my throat from getting irritated by the cold dry air.

Am I having HACE? Last night, every time I woke up, the word that came to my mind is Thamserku! Those mountains are growing on me!

Got up early to climb up Gokyo Ri for another panorama view of the valley. Ri means peak. Gokyo Ri is the high point at Gokyo. It’s a windless clear day again. I can even see Lhotse Shar next to Lhotse, and Makalu in the distance. There was a lot of haze in the air, so the pictures came out like blue-hued postcards.

After resting for an hour after Gokyo Ri, we started our hiking back to Dole. It was a long day, a lot of descending! I was so lucky that the weather was so good during the whole day, and I couldn’t have enough of Kangtega and Thamserku in front of my eyes. Cho Oyu is like a loyal lover standing there behind me to send me off. The trail winds from one side of Cholaste and Taboche to the other side, and I was amazed at how different they looked as the day moved on. When I came to Gokyo a few days earlier, it was cloudier. So I now feel like having a fresh look at everything again. I just can’t stop enough times to take pictures again and again. Cholatse, Taboche, Kangtega, Thamserku! I kept on repeating those names every time I look up, and I used the word “insane” to describe the beautiful view all the way. I can’t get enough of them!

At Dole, I had my first taste of alcohol drinks on this trip. We were staying at the lodge run by Pasang Sherpa’s wife, Permba Sherpa. Pasang is going to work at Camp 2 (ABC) as the cook for the team. There are no other guests here, only me with my trekking Sherpa Dawa, porter Tsuri, Pasang, and his wife. So I joined their tradition of drinking at end of a trip. It was a kind of rice wine that looks like milk, but tastes like saki. Dawa and Pasang will soon pack up to head up to EBC to meet the team on Apr 12. Other than a glass of beer at Puja ceremony, there will be no alcohol until end of the trip. So this is one of few opportunities there are to relax and celebrate a good time.

EVEREST TRIP – FROM DOLE TO MACHHERMO

EVEREST TRIP – BACK TO NAMCHE
Scroll to top