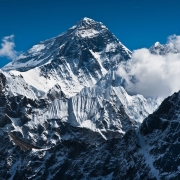 Got up early this morning to get packed before 7am, and we set off around 8:30am. So far on this trip, every day has been blue sky or light clouds, pleasant temperature around 75F.

We took the lower trail that cuts across the hill we went up yesterday. The beginning part of the trail is shared by both EBC and Gokyo trek. Both Mt Thamserku (next to Namche) and Mt Ama Dablam are in clear view. Ted kept on helping me review the mountains that I will see in the next few days. He seemed more worried about me not recalling the names of the mountains in front of my eyes than the climb itself.

Almost an hour into the hike, just before the hairpin turn of the trail, came the little town Sanasa. Under the background of Mt Taboche and Peak 38 in the distance, we shared the last cup of tea, and split our ways a few minutes later. Ted took the lower pass toward EBC via Tengboche, and I headed up the hill towards Gokyo via Mong La pass.

“Be safe and take care of yourself” were our last words for each other. 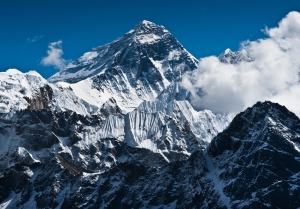 I know many friends back home would have said the same thing. Yes, summit or not, safety is the most important thing. I have been chatting with Dawa Sherpa and other people a lot about all the details of the climb, and intimately understand how dangerous this climb is. Confidence is not something we talk about here. Mt Everest has been so commercialized in the past few years, and enough movies have made it just another fun reality show like Survivor, so the climb appeared to be less serious than it was. But when you are in it, you can fully appreciate the challenge and danger. It’s impossible not to get nervous. Excitement is for people who look from outside and far away.

After a steady ascent to Mong La at 3900m, the trail descended into Phortse Tenga. Phortse means “high up” and Tenga means “by the river.” This is a very low spot by the river at about 3500m. I had steak, potatoes, and boiled vegetables for lunch, but found it hard to take down and I could barely finish half of the steak and potatoes. Energy-wise, I felt good, so we pushed on according to original plan to Dole, which is another 2 hours uphill from 3500m to 4100m. It must be the meat— I started to have stomach cramps soon after we took off. I remembered that all the meat has been traveling for several days from Lukla on porters’ shoulders, no refrigerator— I need to be more careful about food now!

It was cloudier in the afternoon, so it was hard to see any mountains. We just followed the river from high up in the valley. One Australian man caught up with us. After we exchanged hellos, he asked, “You are not the Lei who climb Everest, are you?” The world is indeed small! This is Brad Jackson, who came to climb Everest with Alan Arnette in 2008. He already knew everything about me, and I got to poke his brain about more details of the climb. Brad is on his second attempt to Everest, and he is doing the same pre-climb training trek that I am doing.

By the time we reached Dole at 4110m, there was some light wind and heavy clouds, and the temperature dropped to 40ish. With still just one T-shirt on, I could not stop shivering and had to change into dry clothes and put on my belay jacket immediately.

To my surprise, my friend, Mike Coote, came out to greet us when we walked into the lodge! After he took off from Namche, he felt it necessary to rest in Phortse Tenga last night instead of pushing on all the way to Dole. Looks like we will get to share the hiking more!

I have been fighting stomach cramps during the afternoon hike, I only had Sherpa Stew (potato and cabbage soup with a little pasta) and boiled cabbage for dinner. This is the lightest meal I have had on this trip. My stomach calmed down. Later I learned that local people only eat meat during cold seasons when meat would not rot during the many days’ transportation from Lukla.

EVEREST TRIP – FROM DOLE TO MACHHERMO
Scroll to top