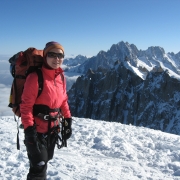 “…since you have demonstrated that you can’t make the right decision yourself, I have to make this decision for you– going down is the only option….”  — Eric Simmonson

Today is the rest day in Namche. I got up early to take an easy walk up the hill of memorial park, and caught some nice pictures under soft morning light. After breakfast, we walked up 300m to the hilltop where Everest View Hotel is situated. Clouds covered Everest, but we got a good view of Ama Dablam. Good views of the mountain will be abundant on this trip. On the other side of the hill is Kunde village, where Pasang, Ted’s Sherpa, comes from. In the distance, we can see Portse, where Dawa, my Sherpa for the trekking part of the trip, comes from.

After lunch, I went over to my friend Tsedam’s shop. Internet service at his hotel only works in the night when he gets back there. So we just used the expensive internet service from Cyber Café across the street, slightly cheaper than our hotel. Can’t upload too many pictures though.

At the lodge, Mark Inglis was giving a lecture about past events on Everest. He talked about the balance between being persistent and having good judgment. He said, for each step, there are two questions one should ask him/herself: can you take the next step, and should you take the next step? He talked about turning around some climbers who clearly were in danger, and how he had to remind the climber of their family to make him/her accept the decision to turn around.

This reminded me of the episode on John Golden in Everest: Beyond the Limit Season 3. He had an injured knee and an broken rib. Eric Simmonson eventually made the decision for him:

“…since you have demonstrated that you can’t make the right decision yourself, I have to make this decision for you– going down is the only option….”

It was cruel to have that moment caught on film. But it is a sober reminder for anyone who is attempting Everest.

I’m very excited seeing those beautiful mountains so close, but I know I can’t let the excitement take over me, and I can’t let any setbacks (such as luggage problems, flight delays, and who knows what’s next) upset me. I just want to focus on each step in front of me and keep myself in a calm mood and healthy condition. I have a goal, but I don’t want to put myself under the pressure of any expectation. I know my limit, and I know I’m such a newbie to the Himalayas. It’s a privilege to be here in this beautiful land and it’s an experience of a lifetime no matter what the outcome might be. It’s important to respect the mountains and respect the limit. At the same time, it’s very warm in my heart knowing that there are so many friends cheering for me, a home team who is providing support while I’m out here.

For the trekking part of the trip, e.g. until we arrive at base camp, there are tea houses and lodges all the way at each village or town. We will have the comfort of a bed and restaurant, but nothing comes cheap. Shower 300 rupees, rent a towel 100 rupees, internet 10-15 rupees per minute, charge a battery 100 rupees. There’s barely any water from the tap at the tiny sink (one per floor), and it’s explicitly posted that you can’t wash clothes there, e.g. you need to pay to use their laundry service. To fill in boiled water here at our hotel in Namche is free at least (I was surprised at the charge of 80 rupees per bottle of boiled water at Monjo), but probably won’t be free in other smaller villages along the trail. (Note, 70 rupees = 1 USD).

Food at the lodge is healthy and tasty, especially any dish with a “sherpa” in its name, such as Sherpa tea (milk tea), Sherpa soup (potato + veg), and curries. There are plenty of potatoes and rice for carbs, some fresh vegetables like cabbage and carrots, and I can ask for things not fried, e.g., soup or steamed, but protein is not easy to find. So far, the protein comes from Lentil soup (very watery), eggs, small pieces of meat (buffalo), maybe a tiny bit of tuna if I order momo or spaghetti with tuna sauce. The portions are small too. I always have to order two or three entrees for each meal and often get the comment, “It’s too much you are ordering.” 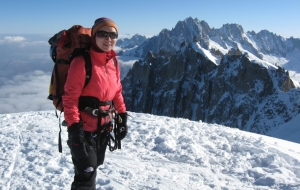 In previous trips, I just ate whatever came my way, but after the past few months’ training, I became pickier about the structure of the food I take. I learned to look at food in terms of nutrition components and discriminate between the good kind and the bad kind of each component (e.g. good carbs, bad carbs) and got used to calculating the portion of each component as well. It takes effort to eat right when there is just so limited variety of food available here. Though there are yaks everywhere, it’s a taboo to slaughter them for food. So the meat supply comes from buffalo outside the area, and is carried here on porters’ shoulders from Lukla along the same trail we just hiked through.

Once at base camp, the tent will be our home, but food, shower (of course, can’t compare that to the showers from a real hotel or home in the west), and water will be more accessible without extra charge.

For the past few days, I was accompanied by two friends from Boston: Mike Coote, my climbing partner of several years, and Ted Mayer, who has studied the Himalaya map so well that he could tell me what peak is in front of my eyes at each turn. We shared the trek from Lukla to Namche. This morning, Mike took off to Gokyo, then he will cross Cho La pass to the Everest side. His goal is to climb Island Peak. Tomorrow, Ted and I would also split our ways. He is trekking to Everest Base Camp directly, while I will slowly trek to Gokyo before coming back toward Namche to meet up with the group.

Because of the delays caused by luggage problems and weather at Lukla, I’m three days behind schedule for my trekking part. Since the group will be acclimatizing at Namche for three days (Apr 2nd – Apr 4th), I now plan on joining the group in Namche on April 4th the earliest. Or I could meet the group in Tengboche, the next stop after Namche. I will make the decision with Dawa Sherpa later based on how I feel and the actual schedule of the group. If I don’t come back to Namche to meet up with the group on April 4th, that would also imply that I will not have internet and shower until base camp on April 12th! I would have to stretch each piece of my clothes/socks to its “dirty” limit.

EVEREST CLIMB – MY TREK FROM MONJO TO NAMCHE

EVEREST TRIP – TREK FROM NAMCHE TO DOLE
Scroll to top