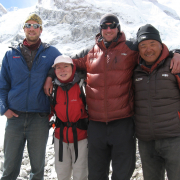 Since the summit day (May 24th), we have been on the move every day— descending from Camp 4 (C4) to Camp 2 (C2), then C2 to Everest Base Camp (EBC). Then packing and moving out of EBC, and now I’m on my way hiking out of Khumbu Valley.  While busy walking or climbing every day, I have kept on thinking again and again of what happened during the past few days, but didn’t have much time to sit down writing. This is by no means a detailed report; rather, I just want to give everyone a general idea of what our summit day on Everest was like.

Thunder in the heavens

First of all, it’s very important to clarify the actual condition of the summit day, or more accurately, the summit night. The weather forecast was “less wind, but higher probability of precipitation.” There’s no way to know how much “higher” probability and how much precipitation. So we had to go with our guts and hope for the best. The snow and wind started in the afternoon and soon became blowing snow, heavy storm conditions by the time we were ready to ascend.

Camp 2 radioed down, “Hey, we are snowing at Camp 2 here. How are the conditions down there?” Justin humorously responded, “Yah, we see snow coming up from the ground here.”

We started the summit push around 8pm on May 23rd despite the blowing snow and limited visibility. Alpine Ascents also stuck to original summit plan, as we did, in the hopes of conditions improving later. But Rainier Mountaineering (RMI) postponed their summit push to the next day. I started out by fully covering my face with the combination of goggles, balaclava, buff, and oxygen mask.

Slowly, my goggles started to fog up, but I dared not take them off because I have heard several stories of frozen corneas on summit day, and that would be the end of it all! The few times I briefly removed my goggles to clean them, the wind and snow would blind me instantly. I could feel it was very cold out there, but I was keeping myself very warm with a good climbing rhythm until we hit Balcony.

For a short period, there was even thunder and lightning around us. I was a little concerned, but obviously, there was nowhere to escape to and there were not many objects higher than us. Since lightning strikes on Everest are rare and the thunderstorm did not look like a severe one, our guide decided we would continue.

My first scary moment came at Balcony (8,400 m, 27,600 ft), where we would change to a new oxygen bottle. I had been climbing at a good pace and did a good job keeping myself warm. After taking me off from my current bottle, my Sherpa Da Tenji found my new bottle leaking. This is considered to be the textbook reason for accidents on Everest! Any problems with an oxygen bottle not only would cost the summit, but more importantly, could easily cost a life.

While he was busy fixing it, I started to get cold fast. There was blowing snow all around us, blinding from all directions. No matter how I turned, it was impossible to find a safe place to drink or eat. As this dragged on for several minutes, too long in my mind, I started to find myself struggling for air, maybe out of panic. It felt like a long time, though I think it might just be psychological, but it was scary! During those long minutes, my mind kept imagining the worst.

Things that could go wrong…

While we were fumbling around with the bottle, many climbers have passed us and moved on. When I finally got going again, I soon found myself joined at the end of a line of climbers that were going nowhere. A veritable traffic jam on Everest! Another classic situation for accidents! I couldn’t see what was going on ahead. It was dark and visibility was low; I could not make out was around us, left or right. It looked like a narrow ridge, which would be very dangerous trying to get around other people. I was wondering if to the right side of us was China.

My guide, Justin, came up from behind and jumped on the snowbank in order to bypass the line to see what was going on ahead. After quite a while, Justin returned with one of our team members and told the team to “move slowly, wait for the sun! Hopefully the weather will improve!” (Later I learned the implication of that instruction was that Justin was planning to turn the whole team back at South Summit if the weather did not improve by the time we reached there. Looking back, we were lucky that the line moved so slow! Otherwise, my summit would have been called off!)

The line started to move but still at a snail’s pace. I don’t know how long I spent standing still, it felt like hours. My body didn’t heat up much yet, and now my feet and hands were starting to feel frozen. The traffic jam could also waste oxygen, a limited amount in each bottle. We would have to give up on the summit if we wasted too much time going nowhere. I have felt pretty confident about my physical condition before the summit push, but I have no control of all these kinds of unknown situations. I told myself, I love rock climbing and I want to continue to climb after this, so I can’t lose one toe or one finger! I kept on dancing on my feet and wiggling all toes and fingers.

When I finally came close to the spot, it was a rock spur on the South Summit that had slowed down progress (there were also some slow or tired climbers causing the slowdown earlier, but that has been

solved by Justin). It was a long series of imposing rock steps that was very challenging for big boots and crampons. Also, if you stepped to the east into waist-deep snow, you could run into a serious avalanche hazard. As a rock climber, I’m really embarrassed at my clumsy move to struggle through the difficult spots. At that moment, I didn’t know the name of the section. I was wondering if this was Hillary Step, and how many steps did he take? If it was not, how was I going to handle any steps even more difficult than this? 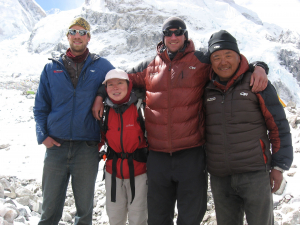 Floating in the clouds

By the time I was near the top of the rock spur, I could see sun rising through the clouds. Yes, “some clouds,” but they were everywhere. We were completely wrapped in thick clouds! It was a relief to see the sun! I know I don’t need to worry about frostbite anymore. Wind had also calmed down and the South Summit was just ahead of me!

When I stepped onto the South Summit, my Sherpa Da Tenji checked my bottle. I was a little bit nervous. Was my bottle leaking? Did I waste too much air while standing in line? “Ok, you have enough left to go to summit.” What a relief! Then he pointed forward at the col below the south summit, “That’s the Hillary step.” Oh, those rock spurs I just struggled over were nothing?

Hillary step was a little bit awkward, but at least it was only a few steps! After that, just some snow slopes. Life is much easier from there on! Not too long, through the heavy fog/cloud, I saw piles of people hugging around at the end of the summit ridge.

The feeling of standing on top of the world is a little bit strange because we can’t see anything other than the little pole wrapped by numerous prayer flags. Nevertheless, everyone was very happy to finally stand at this spot even though we couldn’t take a panorama photograph of the world. Anyway, half of my seven summits had the same view (clouds), so I was almost getting used to it. (So, this explains the lack of photos I could share with you all. I guess I need to come back again one day to make up for those photos!)

After taking enough pictures (how many can you take in heavy clouds?), I know the more serious job is to descend safely. More accidents happened on descent in mountaineering, especially we have those ice/snow covered rock steps all over the mountain here. More challenging for Everest, descending to C4 does not mean that we have finished.

With each day working at full capacity to climb or descend, each day gets more challenging. From C4 to C2 was a relentless steep downhill. Then, after you felt like your leg muscles have been depleted, you needed to stay alert to navigate through the icefall. Only when you returned to EBC could you relax. The last descent through the icefall was what concerned me even more than the summit. It is like a stream of mini- summits that you have to focus your energy and work so hard on when you are already at the end of your rope

THOUGHTS BEFORE THE EVEREST SUMMIT

How to motivate yourself when you are bored
Scroll to top