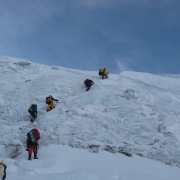 Do you believe your daydreams can become a reality as soon as tomorrow?

Last week, I was skiing at Breckenridge in Colorado. At the end of the first day, I received from the resort an email with my “scorecard”. It said I skied 7,854 vertical feet on my first day – a small number for big skiers, but I was just happy to be back on the slope.

I’m not a big skier; in fact, when I first started learning to ski in 2009 – one year before my climbing trip to Mount Everest – I tore my ACL early in the season. It was quite a blow to my confidence, and it took me several years to regain it on the slope. Though I’m inspired by those images of skiers carving perfect turns shooting down from high peaks, I’m pretty satisfied for now with practicing basic techniques in protected territories.

On the second day, I worked hard and hit 18,033 vertical feet. I was excited.

I ski for fun, not for earning points, but those seemingly meaningless points actually did bring me some joy, just like those little gold stars given to kids in preschool. They acted as an interesting incentive for me to push a little harder each day. A few days later, I surpassed 20,000 feet, the equivalent of skiing down Mount Denali, the highest peak in North America. I began to daydream: How nice it would be to ski the equivalent of Mount Everest, 29,029 vertical feet?

That goal would require a performance improvement of almost 50%. While I thought it was a reasonable goal for future trips, I didn’t think it was possible this time.

On my second to last day in Breckenridge, I was skiing with some friends who are expert skiers. They pushed me to work harder than ever. At end of the day, I was exhausted but thrilled to discover that I skied 25,613 vertical feet!

Suddenly, skiing “Everest” was not as far-fetched as it was a few days ago.

I realized that while I was still skiing at my own comfortable pace, the only difference is time management. Instead of a long lunch break, we took short breaks from time to time and stayed higher up on the mountain to avoid the crowd. Most runs on the mountain are about 1,300 – 1,400 vertical feet, so I only need 3 more runs to reach my Everest goal.

However, squeezing in 3 more runs is not as easy as it sounds; it would require an extra hour of skiing. We had already managed our time very efficiently. We were on the first chair up the mountain and skied all the way until the mountain closed at 4pm.

That night, my mind was occupied with calculations of time. How could I squeeze in 3 more runs?

Avoiding crowds and lines would be critical, so I planned my route to focus on runs around two fast lifts higher up on the mountain. I needed to be even more efficient when taking breaks.

During my last day on the mountain, I was obsessed with time management. Every minute counted. At the same time, I was aware of the dangerous side effect when one’s mind is too focused on a goal. I repeatedly told myself to slow down, safety first! I picked the trails with the best snow and enjoyed the serene scenery with every turn.

Thanks to the new technology, I was able to check my progress in real time. I was on schedule, but I would be short by one run unless I could catch the last chair at 4pm.

During the last hour, it was as if I had the clocked dialed in my body. Even shaving off one minute or a half-minute from each run would make a difference. At 4pm, with my heart pounding, I flew through the gate to grab the last ride. Behind me, the worker pulled the line and shouted, “Closed!”

I hit 30,336 feet on that last day! Without the last run, which was 1,466 vertical feet, I would have been 159 feet short of my “Everest goal.”
I didn’t mean to turn every run on the slope to a goal-chasing mission, nor did I mean to make every vacation day a “lesson” day; but sometimes, when it’s something to your nature, you simply couldn’t resist the call.

When your audacious daydream is connected to your heart, you simply couldn’t stop thinking about it, even when you couldn’t explain the connection and you didn’t ask for it. You are obsessed with making your daydream a reality. That’s the first fundamental difference between a pure daydream and a reachable goal.

“Audacious” is relevant. A goal that appears like a daydream to one person may be completely trivial for another. A big skier can easily hit 30,000 or 40,000 vertical feet on a regular basis, but for someone like me, who is still relatively new to the sport and whose previous regular range was only half of that, skiing “Everest” in a day was a big challenge.

It doesn’t matter how others may laugh at or brush aside your dream. Your dream is your own. However, just to want it, is not enough. A dream would remain a daydream if you do nothing about it.

When you can visualize your goal, you can reach it.

Visualization is more than just a wishful thinking, a beautiful imagination. It’s about focusing your mind, and thus your energy, on it. When you want it so much, you not only visualize the goal, you also visualize the path towards the goal. You map out each step and come up with a solution to each anticipated hurdle.

When you put your mind on it, make a plan, and focus all your energy on the action, a daydream becomes a realistic goal. Stop pushing them away and get started now!

Stop pushing them away and get started now!

What A New Year’s Resolution is Not About

Getting My Courage Back
Scroll to top